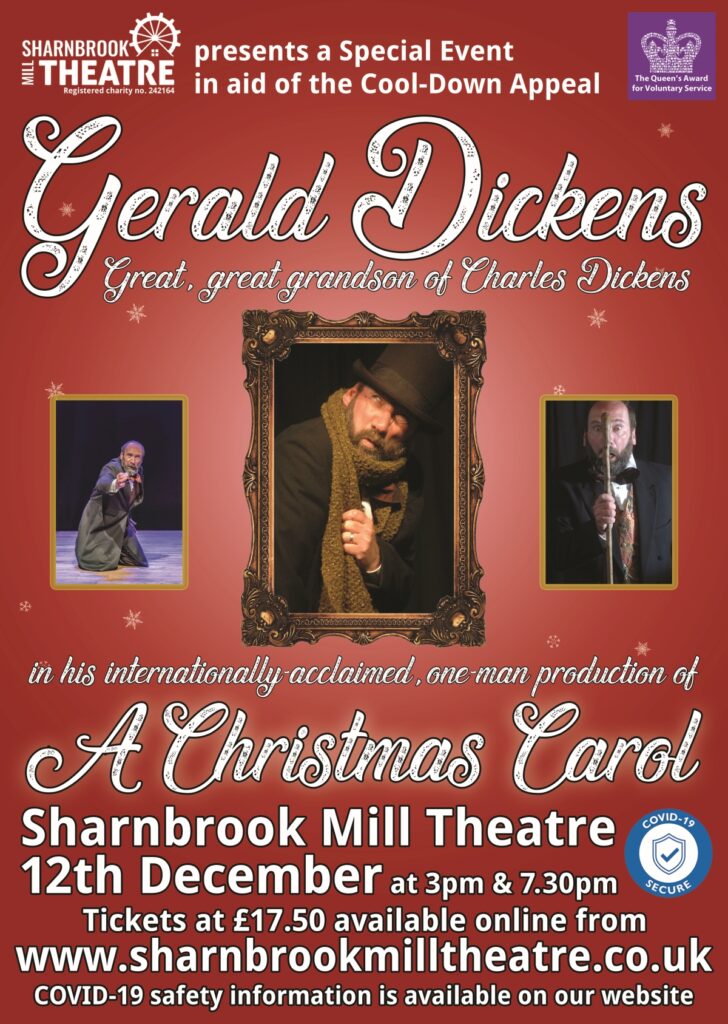 Late in September, the Fundraising team held a Zoom meeting to discuss the practicalities of putting on a one man performance of ‘A Christmas Carol’ by Gerald Dickens, great, great grandson of the author Charles Dickens. After some discussion, it was clear that the majority were keen to proceed, but we first needed the approval of the Executive Management Committee (EMC).  The EMC approved the event, subject to a few stipulations requiring that the necessary COVID-19 protocols were in place.

Some of the Facilities and Fundraising teams met to discuss the guidance to ensure social distancing could be adopted, all in line with the Government’s Performing Arts Guidelines. We also researched how other theatres up and down the country were managing the issues.

After yet another Fundraising Zoom call and consultation with the Facilities Team, it was agreed that ‘the show must go on’, as they say. We did however manage to re-arrange the date with Gerald to 12th December. We were really lucky as Gerald is usually on his America tour at this time.

We were off and the clock was ticking. The Marketing team sprang into action wanting some details for advertising and press releases. It was felt that we needed to advise our audiences of the seating arrangements and COVID-safe procedures in our advertising on the website and flyers. Brenda Stafford would check the guidance procedures; little did she know what she was taking on: the guidance notes were pages long with plenty of sub-sections. However, if we were going to go ahead with the show we needed to do everything necessary to keep both audiences and volunteers safe.

Alan Capper (Treasurer) and Gerry Stafford (Health & Safety Governor) worked out a seating plan to maximise the numbers and ensure social distancing. Tickets would be sold in pairs with a limited number of groups. Mike Horne (Marketing and website) worked a small miracle to get all the details on the flyer and found some useful icons to use on the website for the COVID rules. Tickets would go on sale from 1st November and within the first 10 days, a good number of tickets had been sold. It had always been a worry whether people would come to the theatre during this time.

We had a nail-biting few days at the beginning of December waiting to hear in which COVID tier Bedford would be placed. Fortunately, we were placed in tier 2 and so we were able to go ahead with our plans. By this time, the evening performance tickets were sold out and matinee sales looked good.  Some people from Leicestershire who purchased tickets were unable to come as they were in a more restrictive tier, so we refunded them and resold the four tickets within hours.

The Fundraising Team held a Zoom call, and everyone took on a role. Susan Moore (who made the first contact with Gerald) offered to source mince pies. Richard West and his wife, Ann, would deal with the kitchen and drinks. Chrissie Summerling would do a display in the foyer and Ginny Pope would decorate the Christmas tree. The red and green markers for the seats were arranged by Brenda Stafford with help from Ginny Pope, and Ann West. Everyone played their part in the Front of House team too.

The technical team: Mark Luckin (sound) and Ron Johnson (lighting) were on board. Mike Horne was recording the show for streaming at a later date. Andrew Knight (retired FOH manager) and Karen Sykes (trainee FOH manager), along with Nicole MacDonald, Stella Perman and Sue Lander from the Production Committee made up the full complement to ensure we were well staffed for the day. All tickets had now been sold and we were delighted that we had decided to go ahead with the show.

Gerry Stafford held a training session to explain the procedures to get everyone in and out of the building socially-distanced and safely, and how the one-way system, seating in the clubroom, bar and within the auditorium would work. The contactless thermometer, hand sanitizer, face visors, masks and gloves were purchased, along with signage. We were ready.

With just days to go, a few tickets were returned and re-sold; this bit was a little stressful! Thanks to Alan Capper who kept control of this.

Between performances, the building had to be cleaned by our cleaners Keith and Jo, and we had arranged for the auditorium to be fogged to ensure no bugs were alive.

From early on Saturday morning, the Mill was buzzing again, making sure everything was in place. Gerald arrived in good time and he seemed delighted to be back acting in a theatre again. You can read his thoughts on the day here. You can also rent a recording of a special filmed performance of Gerald performing A Christmas Carol here.

All the wonderful messages we received from the audience made the last 10 weeks of hard work and sleepless nights worthwhile.

The Fundraising team were delighted with the event and would like to thank everyone for whatever part they played in getting The Mill open again.