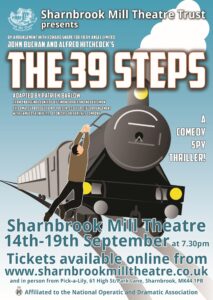 Our September drama is The 39 Steps by Patrick Barlow, based on the classic Alfred Hitchcock film

It is a hilarious comedy spy thriller with parts for 3 men and 1 woman and will be great fun for the cast and the audience.

Richard Hannay – playing age 35-50 ish.
Plays the same part throughout the show and is posh and confident with a stiff upper lip.

2 male clowns – any age.
They play a massive number of characters, sometimes at lightning speed. They will need lots of energy (and no oxygen is provided!)

The workshops and auditions will be held on 6th and 8th April at The Mill at 7.30pm.