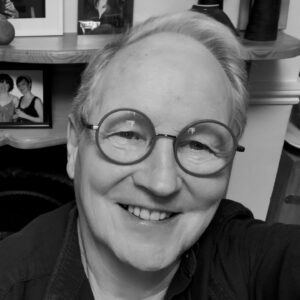 Paul Frecknall, director, performer and friend to many of us, sadly passed away on 27th September, 2021, aged 67, after a long battle with illness. Kaye Stevens has kindly written some words that sum up Paul, his passions and his legacy.

It is with great sadness that we mark the passing of Paul Frecknall: thinker, friend and theatre director extraordinaire. Occasionally a creative spirit crosses your path who weaves a binding spell, becoming a luminary for those who wish to learn. Paul was such a spirit. Renowned for his perceptive view of the world, he brought his well-travelled and examining mind to every theatre that he graced.

Paul approached text, character and production design with a holistic mindset and detail, that elevated his work beyond the natural confines of community theatre. He set standards, opened minds and encouraged others to make a difference. He inspired his grateful casts, notably in many plays, but at Sharnbrook Mill Theatre he also worked on two musicals: ‘Company’ by Stephen Sondheim and ‘Parade’ by Jason Robert Brown. No-one who worked on those projects will forget the passion and commitment of this ingenious director to make everyone shine.

Paul was a talker, his ideas came so fast and so constant, that his creativity flowed like a stream. Shows he’d seen, art that he loved, places he’d visited, courses he’d studied, writing that had provoked him, food that had excited him – all things shared with such enthusiasm you were carried aloft with his appetite for life.

He lived. And he lived with gusto. Most of all, he was kind – even during his illness, his smile greeted every visitor with touching affection. His love for his family and friends was amply displayed, heart on sleeve. We loved you too Paul and do still. Very much.

Paul leaves behind three daughters, three grandchildren and a host of friends and family who will always remember him. We are dedicating our Christmas production, Once Upon a Christmas Song, to Paul.