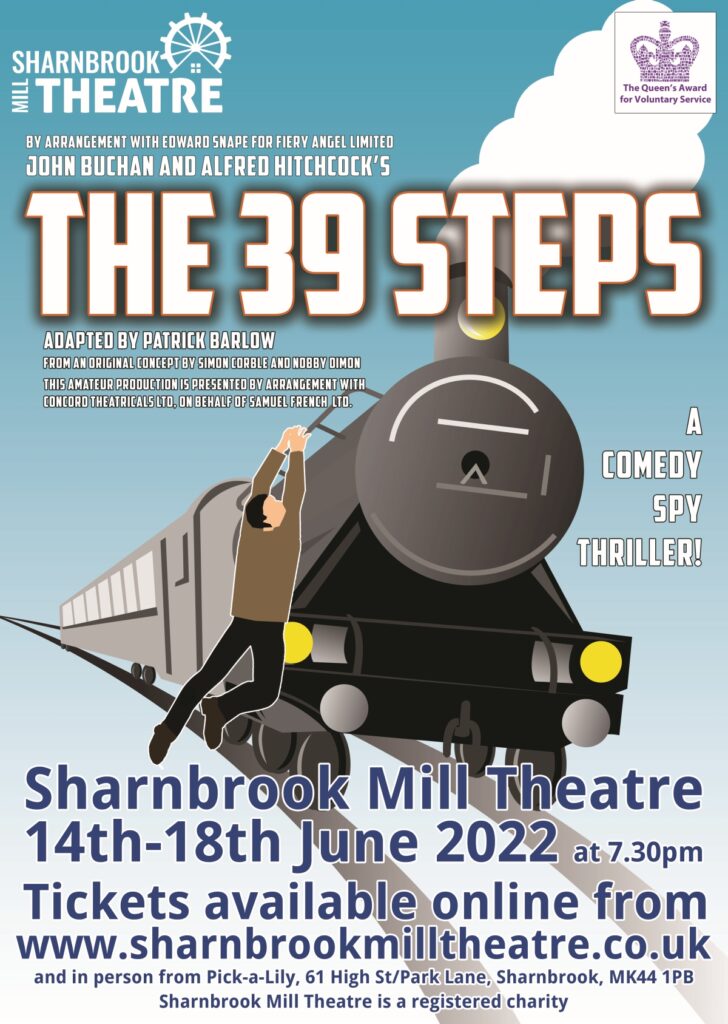 This show will always have a special place in my NODA career as District 2 rep, it was the first play I ever reviewed. It was of course hilariously funny and I have loved it ever since, so when Sharnbrook announced it was putting it on at The Mill I was really looking forward to it. I was not to be disappointed!

For those who haven’t seen it, this is a spoof comedic version by Patrick Barlow of John Buchan’s 1915 spy novel and Alfred Hitchcock’s 1935 film. Or at least it has a passing resemblance to the original plot, but in this case comedy is definitely the overriding king.

The set built by Stage Manager Gerry Stafford, Kevin Beirne, Rod Arkle and Dave Jones used both the stage area and the gallery above to full effect with a large video screen to the rear of the gallery to depict each scene location. The gallery itself served perfectly for several scenes such as a box at the theatre, the Forth Bridge, and, most amusingly of all to fly (well, hand hold!) a wonderful box kite large model aircraft when pursuing Hannay across the Scottish moors.

The main stage was mostly set by the use of furniture and props brought on by the cast, which was also very comedically but extremely slickly set. There was for example very clever use of some early 20th century travel trunks which became the basis for several beds, or the full blown street light brought on and off by our two villains. And just to add to the comedy a couple of props were made to go gloriously wrong, such as the blind in Hannay’s apartment that wouldn’t stay down and the telephone that wouldn’t stop ringing. And of course the escaping through various windows by Hannay putting a frame over his head or waving his jacket behind him to signify the wind on top of the train always brings out the best laughs. Very well thought out by Director Susan Moore, Co-Director Kim Arkle and the props department in the clever hands of Zandra Saxby.

Dave Jones (Lighting) and Mark Luckin (Sound) were on top form again with some very slick changes adding to the comedic effect with such tricks as in the aforementioned non stop telephone. Particularly liked the rather pathetic ‘plop’ into the water when Hannay finally falls off the Forth Bridge! Great job guys.

Costumes by Virginia Pope, Ann West, Julie Poole and Gill Ridley were, as you would expect from this crew, well-chosen and totally in period, with some wonderfully over the top tartan for our crofters, a very appropriate polka dot dress for our heroine and of course a tweed suit for Richard Hannay himself. However, I have to say I didn’t envy him wearing it on a this very hot night in June!

Richard Hannay was in the very safe hands of consummate pro, Tim Jackson-Waite whose tongue-in-cheek mastery of the pipe smoking hero was a comic delight with his stiff upper lip attitude and great facial expressions. Not to forget his pretty good mastery of the monologues.

Pamela, our love interest played by Kaye Vincent, was an excellent choice as she brushed Hannay off and turned him in to the law before becoming his perfect foil to take on our villains.

The two Clowns as they are called in the programme (It was originally written as a four hander with the clowns to be in full clown makeup and play every part but the 2 leads, but it works perfectly well without.) played so many different parts you end up loosing track, and sometimes several different characters in the same scene. David Mander and Alan Galway were absolutely spot on for these multiple roles and had us in stitches at times as they switched from police to villain, to crofter, to Mr Memory, to The Professor etc. Their comic timing was outstanding.

The rest of the cast, Tom Carter, Leisa Cooke, Julie Fletcher, Alexandra Goodbody and Jenny Tymon-Robins were a very well disciplined outfit who when not acting were sorting furniture and props for each scene. The opening scene even had them taking a bow before the action started.

Director Susan Moore and Co-director Kim Arkle can be justifiably proud of this show. It’s a quite an artform to get comedy out of every aspect of a production, but when you see audiences laughing at scene changes and the clever tricks deployed to move the action along at a pace you know they have got it right. Some I have seen before, but many were new and that’s beauty of this play it lends itself perfectly to experimenting with new ideas and comic touches.

That said, this was what I call a Friday night audience (even though it was Thursday!), they chuckled with great big grins rather than laughing raucously out loud. I found myself sitting next to two people who had never been to the Mill before and were definitely hooked by this one. At half time and slipping out for some air on this hot night, I found myself talking to another audience member who had not been here either and was waxing lyrical about the show. As this was a packed auditorium with not an empty seat in the house, I think it can be said that this show went down extremely well indeed and on my sample poll was attracting new audiences.

Finally, many thanks to FOH Manager Gary Villiers, your hospitality was as usual, second to none!