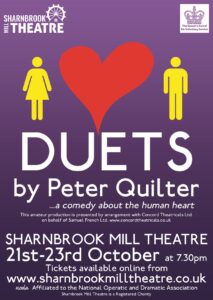 Oh Yes! What a pleasure to be back in front of a real actors, performing real live theatre in front of a real paying audience! Apart from the presentation of the Queen’s Award for Voluntary Service ceremony I attended back in September, it has been 20 months since I last sat in an audience at the Mill and nearly 11 months since I sat in any theatre whatsoever, and what a wonderful feeling it was! But before we get to the auditorium it is worth noting that on arrival the first thing you notice is that Sharnbrook had not been idle during its enforced closure to the public. The whole place had been wonderfully spruced up with a new lick of paint from the foyer to the bar area and the auditorium itself. With its new tables and chairs in the bar area It felt as if you were entering a brand-new theatre. Nice job guys!

Sharnbrook wisely chose Peter Quilter’s play Duets as their reopener. Basically, requiring just two actors for each of its four half hour episodes, thus easily rehearsed, even over the dreaded Zoom, whatever madness is going on in the world around them. Smart!

Quilter’s play is a quartet of separate short, half hour, beautifully written, comedic plays exploring the various stages of some slightly bizarre relationships. Originally written to be performed by just two actors, director Susan Moore chose to have them performed by three different pairs of actors, with one pair performing two of the plays, which also of course works perfectly well.

The set, build by Stage Manager, Gerry Stafford, with Kevin Beirne and Brian Wood was a simple one room with a front door stage left and an open second entrance stage right, which displayed whatever impression of the rest of the house or building was required for each play. The furniture, consisting of sofa, chair, table, and hat stand etc, was cleverly moved around between plays by mainly the actors themselves, with the help of a stagehand or two to comedic choreography to various songs, choreographed by Jacqueline Knighton. In fact the first thing we saw was two of the actors come on with a heavy weight curtain on a pole, who proceeded to slowly dance their way campily across the stage; disguising the removal of the dust sheets from the said furniture, before hanging it on the back wall to give the impression of a window being behind it.  First laugh of the evening and we haven’t even started!

Sound and light by Mark Luckin and Ricky Johnson set each static set perfectly and Virginia Pope and her brilliant team were back up to their best again after the long layoff with the equally appropriate array of costumes including a magnificent wedding dress which had to be ‘ripped’ and fall apart during various stages of the final play. It also had to have coffee spilt down it, so quite how they got it back to pristine white again for the next performance is a trick of the trade not yet fathomed by yours truly..?

The first play, Blind date performed by Mark and Becky Woodham as Jonathon and Wendy, as two on the shelf single people who have, shall we say ‘embellished’ their CV’s on a dating advert as to their physical appearance and social ability and are meeting at Jonathon’s house for the first time to see if they want to go on a later date. Both having had previous bad experiences and neither of them are exactly masters of socialising. Both actors soon had the audience chuckling as their initial embarrassing awkward attempts at conversation and equally awkward pauses. Anybody who has ever been on a blind date would probably relate and be squirming in their seats. Eventually of course, they warm to each other whilst providing more laughs with various guffaws where for example he states having tried good looking dates, he’d try her, or she comes out with ‘I thought we might save that for later in bed.’  Nicely paced and well timed. An excellent opener with a warm happy ending. And as for Jonathon’s ill-fitting wig, I’m still laughing!

The second play, Secretarial Skills sees Barrie, played by Tim Jackson-Waite as a highly successful rich gay man and Janet, played by Kaye Stevens, his spinster secretary of exactly 5000 days, who is clearly in love with him and has been running his business and social diary for so long he is completely dependent upon her, making her for all practical purposes his nagging wife. As the play opens she has just organised a birthday party for him at three hours’ notice, but the only cake she can find is a wedding cake. Some excellent well delivered camp, mid Atlantic accent (not quite sure why?)  one liners from Jackson-Waite contrasting well with the more pointed ‘left on the shelf’ ones of Stevens’ and they both soon had us chuckling away.  She is desperate to formalise the arrangement despite the obvious drawbacks and wants marriage, albeit on a platonic basis and the play ends with them booking a cruise together.

Play three sees Bobby, played by David Mander and Shelly, played by Emma Legg as a bickering couple on the verge of their marriage breakdown who, decide to go on a pre booked holiday in Spain to see if they can reconcile their differences. She however is permanently plastered and continually flirting with the locals whilst he, fed up with her behaviour starts to repack his bags but can’t quite bring himself to actually leave. Some quite sublime acting between these two sees contrasting arguments, trips down memory lane and heart to hearts, before ending with one ‘final’ early night together. A very well-done emotional roller coaster. Nice job!

Play number four, The Bride to Be, I have to admit, was my favourite. This saw the return to the stage of Tim Jackson-Waite and Kaye Stevens as brother and sister, Toby and Angela on her wedding day. This time played in a well suited to the quips, northern accent; she has last minute angst and panic whilst he delivers one cutting quip after another about her previous failed marriages. And all this is staged whilst she is trying to get into her parachute wedding dress with disastrous results, during which it ends up torn and with coffee all over it. These two certainly did justice to Quilter’s cutting script and I particularly loved the last bit where she leaves the room to get married blissfully unaware that the back of the dress has now also come undone and his expression of it being a step too far to mention is priceless!

So, an excellent evening’s entertainment and a good job done by Susan Moore and her team, but above all it was just brilliant to be back again! Finally, thank you to Andrew Knight and the front of house team for their hospitality.