In another of our “Meet the Governor” interviews, we meet Simon Parrott, Honorary Solicitor to Sharnbrook Mill Theatre Trust. 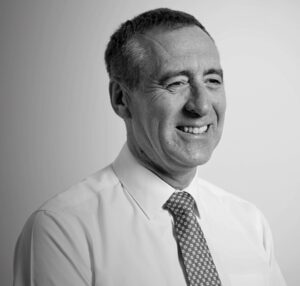 What is your role within the Governors?

Apart from my involvement in the general business of the Board of Governors, as the Honorary Solicitor to the Trust I try to look after the legal side of things. This involves reviewing various contracts which we have entered into, dealing with property issues, the formal Companies House requirements (including the AGM), loan agreements for the H&V scheme, and generally anything that needs legal input.

Why did you get involved with The Mill and join the Board?

I’ve been involved with musical theatre since leaving school. Initially, I played in the orchestras for a number of companies in Bedford and Nottingham. I could fit this around my sporting aspirations at the time. When I gave up rowing (age 30), I joined the Bedford Marionettes as a performer. That was in the early/mid 80s and I progressed through their ranks to take a number of leading roles.

I joined The Mill company in the mid-90s (my first show was Anything Goes, in which I played Billy) and I have never looked back. I was asked to join the Governors in 2005 when one of my former business partners retired (he was solicitor for The Mill at that time). By then, I had realised that there was something special about the Mill and was happy to become a Governor and play my part to keep that special thing going.

What does The Mill mean to you?

It’s a special place. When I’ve had time, it’s given me an outlet for my musical abilities (such as they are) and I hope that I’ve learned something from being able to perform alongside some very talented people. Sadly, pressure of work and my other interests have meant I haven’t had time to take part in a show for nearly 9 years now, but I still feel part of the team when coming to watch performances or helping as a Governor.

What does your role on the Board bring to The Mill?

Hopefully keeping everything legally ship-shape! Many people don’t realise how many issues go with owning and running a building like The Mill. With all the regulation that we now face, there’s always something new to cope with.

Where do you see the future of The Mill in five years?

This is a really difficult one. I think the Mill has a great future as a spectacular performing venue both for our own company and, potentially, other companies. But it doesn’t run itself and I am acutely aware that there are number of “old stagers” who do an awful lot more than me to keep it running. We really need new blood from the next generation to come on board now so that they can learn what goes on behind the scenes and keep our facility strong and viable for the generations to come.

We have another challenge in that our staple audiences aren’t getting any younger, and with electronic communications and social media, today’s youngsters might not have the same interest in watching amateur or live theatre as my generation (or my parents’ generation). So, I think we need to try to address that issue and come up with different ways of reaching out to our audiences to both grab and maintain their interest and loyalty. For example, I can go to the cinema and watch a National Theatre or West End production without all the hassle of travel. When I am old and crotchety, or if I’m on holiday, I might want to watch Mill productions through the TV. We’ve learned a lot in the last year about the way that electronic communications can be used in our business and personal lives, and whilst I think we obviously need to foster live audiences, making it easier for some of our audience members who can’t get to the theatre to watch our productions through different channels might be an answer to secure our long-term future.

Making sure that we have enough performers to mount good quality shows is another challenge. There doesn’t seem to be the same loyalty now within the performing cast as there used to be. Obviously, I understand that good performers will be attracted to different venues and productions that they see as a challenge to their skills. We need to ensure that we can offer those challenges. When I first joined The Mill company, it was seen as a company which was not frightened of pushing boundaries and putting on difficult or challenging shows. I think it still is, but there is a difficult balancing act between staging challenging or new productions and “bums on seats” shows when it comes to making sure that we have a stable financial base for the future.

What is the highlight of your time on the Board at The Mill?

Gosh – there have been so many. On the performance side, who could forget the look on Barry Thompson’s face as he was dragged across the stage on a skateboard whilst trying to reach impossibly high notes as Robin Hood! Or the buzz of being involved in Chase Dark and experiencing the 2 Kayes’ enthusiasm. Some of the youth shows have been absolutely phenomenal and West Side Story, particularly, sits in my memory.

Seeing the way that the Mill building has been improved, particularly the cantilevered walkway from the bar to the green room; and lately being able to sit in the theatre in the middle of winter without shivering to death! But, overall as both a performer and a Governor, there’s one ongoing highlight which is being able to see and experience the way that everybody loves the place, and that feeling of being part of the family as one of the team that keeps it going.