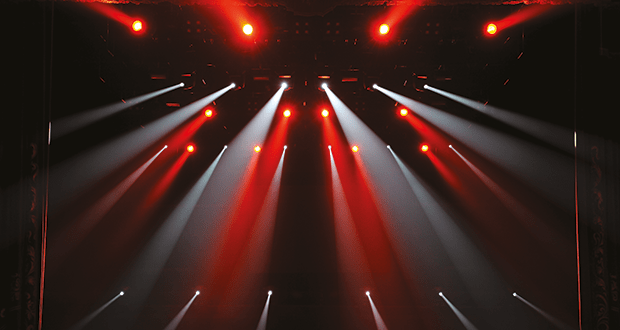 Kathryn from our Marketing Team caught up with Ricky, our Resident Lighting Designer to find out about how and why he joined The Mill’s tech team…

Hi Ricky. Thanks for taking time out of your day to chat to me. First of all, tell me a bit about yourself.

I’m a farmer up in Kettering. We have cows, sheep and arable so that keeps me busy during the day – and some evenings depending on the time of year! We’re just heading into Harvest so the long days are looming. I also have my own business designing, building and renovating jumps and fences for the equestrian industry.

Wow – that’s quite a different world from theatre! How did you first get involved with The Mill?

Yes – it’s great to have a hobby that’s so different from my working life! I grew up helping with building sets and crewing shows at The Mill and other local companies. I enjoyed the creative side of lighting and ended up focusing on that as I got older. I then moved away from the area for a few years so didn’t get to do as much theatre.

What made you come back?

When I moved back to Northamptonshire, my dad (who runs the bar at The Mill and is on the Production Team) asked if I’d be interested in doing one show (Wait Until Dark) to help out the society. As it was a play, it wasn’t going to take up too much time (we were starting lambing on the farm around the same time which is a very busy time for us) so I agreed to help out. That was in 2019 and I’m now back designing all the shows… The Mill sucks you in and it’s hard to leave – it’s a great place to meet people!

What’s been the best thing in the last 12 months for you at The Mill?

I was really pleased to have been nominated for Best Technical in the 2019 NODA Awards for the appearance of the train in the November production of The Railway Children (at the end of Act 1 when the landslide happens). I was over the moon when we actually won the award! Definitely a highlight for me!!

Congratulations! How did you come up with the design for that?

It was a team effort but we did a bit of research on the visual effect of a train coming out of a tunnel and spent a few hours trying different lighting intensities and smoke levels. Once we added the sound effects in as well it was pretty realistic!

If you could light any show, what would it be and why?

There’s so many. To be honest, so long as there’s a good story with some fun creative challenges, I’m happy!

What do you prefer to light – musicals or plays and why?

Musicals. There’s much more scope for creativity and putting your own stamp on it. Plays are good but generally once the scene is set, there’s not much change. With musicals, there’s usually loads of cues and colours to create so it’s much more demanding and fun to do – although that means there’s more chance of something going wrong too so it keeps you on your toes!

Rigging! I’m not a fan of heights so having to hang the lights for each show takes some courage but once they are up and focused, I can have fun with different colours and intensities. The Mill is different to lots of other modern theatres as you have to climb up to the rig rather than fly the rig in to the deck – the ladders have to reach up about 20 foot so it’s quite a way! Other than that, it’s sometimes difficult to make sure my vision and the director’s vision match but I don’t think I’ve ever got it majorly wrong – or if I did, the director didn’t tell me!

Any tips for some of our younger readers (or more mature?!) who want to have a go at lighting design?

Just get involved! It’s been great having Ned and Issac join the team over the past few shows as ‘the next generation’. If you’re interested in helping out, get in touch with the team via social media and come down and have a go. Designing is about learning and developing your skills so watch as much theatre/events as you can – be it live or online – and see the different styles needed for different types of event (musicals are different to bands for example). We have a variety of shows and gigs that happen alongside our 4 main shows during the year so it’s always great to have new people on the team to help out and to provide some new ideas!

Thanks for talking to us – we look forward to seeing another of your designs very soon!