We are excited to present the four shows that make up our 2022 season – three musicals and one play. 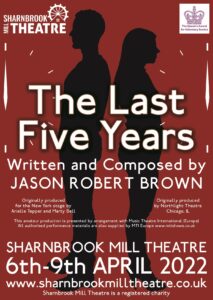 The Last Five Years (musical) – 6th-9th April
by Jason Robert Brown
An emotionally powerful and intimate musical about two New Yorkers in their twenties who fall in and out of love over the course of five years. The show’s unconventional structure consists of Cathy, the woman, telling her story backwards while Jamie, the man, tells his story chronologically; the two characters only meet once, at their wedding in the middle of the show.
Director: Michael Horne
Musical Director: Kaye Tompkins 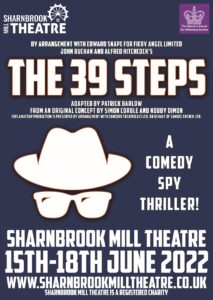 The 39 Steps (play) – 15th-18th June
Adapted by Patrick Barlow from an original concept by Simon Corble and Nobby Dimon, based on the book by John Buchan and the film by Alfred Hitchcock
Mix a Hitchcock masterpiece with a juicy spy novel, add a dash of Monty Python and you have this fast-paced whodunit. This Tony and Drama Desk Award-winning treat is packed with nonstop laughs, over 150 zany characters, an onstage plane crash, handcuffs, missing fingers and some good old-fashioned romance!
Co-directors: Susan Moore & Kim Vaughan 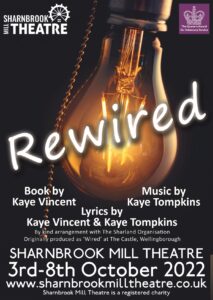 Rewired (musical) – 3rd-8th October
Book by Kaye Vincent, Music by Kaye Tompkins with Lyrics by Kaye Vincent and Kaye Tompkins
In this stunning, warm and witty musical, six people are on the brink of something new, all waiting for something or someone to happen. As a house clearance team removes the belongings of a deceased hermit, they learn about his life and hidden talent. As the furniture and rubbish clears, so does the chaos of their own existence and new connections are formed.
Director: Kaye Vincent
Musical Director: Kaye Tompkins 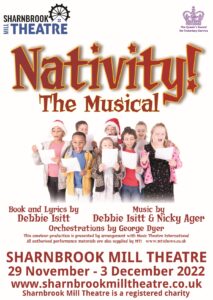 Nativity! The Musical (musical) – 29th November-3rd December
Book and Lyrics by Debbie Isitt, Music by Debbie Isitt & Nicky Ager
Every child in every school has one Christmas wish: to star in a Nativity. The pupils at St Bernadette’s School are no different – they’re attempting to mount a musical version! The only trouble is teacher Mr Maddens has promised that a Hollywood producer is coming to see the show to turn it into a film. Join him, his teaching assistant (the crazy Mr Poppy), hilarious children and a whole lot of sparkle and shine as they struggle to make everyone’s Christmas wish come true.
Director: Cara Sigsworth
Musical Director: TBA

Together with an early 2022 return visit from Gerald Dickens, who will perform his one-man production of Charles Dickens’ Great Expectations and a much-delayed appearance from Gilbert and Sullivan performing group The Wandering Minstrels, next year will be an amazing return to Sharnbrook Mill Theatre. We look forward to welcoming our audiences back and giving our performers and crew a chance to shine!