Background to the show 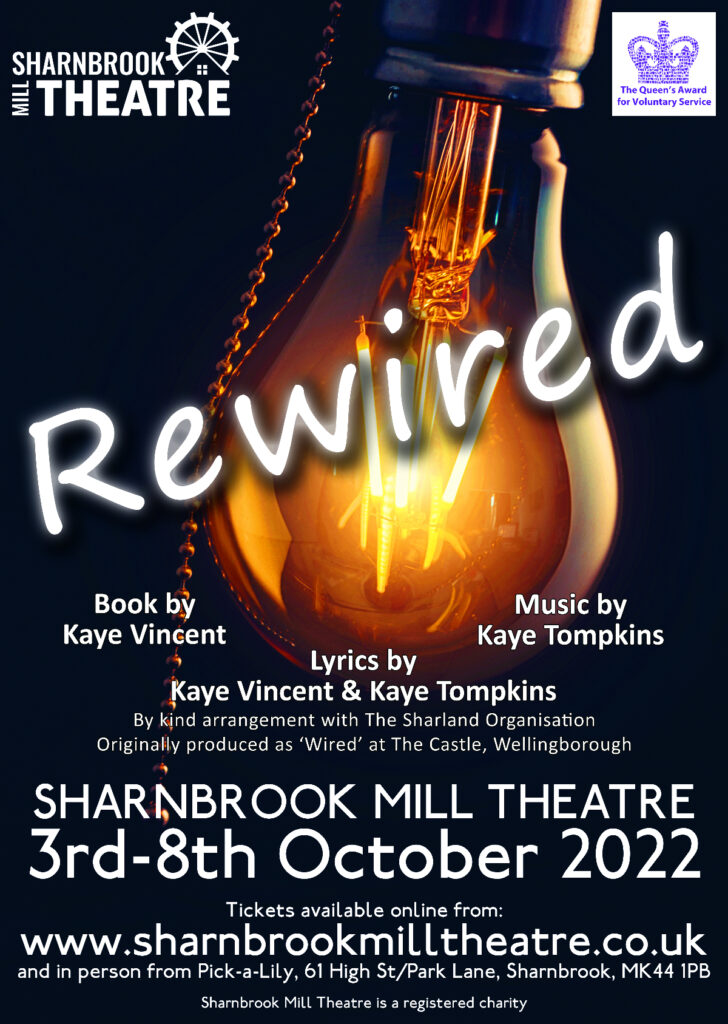 Rewired was originally showcased in 2005 with a professional cast at The Castle Theatre in Wellingborough, under the title ‘Wired’. This new production has been slightly revised, but the concept remains the same:

Six people on the brink of something new. All waiting for something or someone to happen. “I should be someone else by now, if only I knew what or where or how…” Shaz is in lust with Mac, but he sees her as one of the boys. And what chance does she have of changing his mind on a grotty house clearance job? Especially with angry Russ (and his divorce), poor little Brains (with not a lot) and the nosy neighbour Mrs T (with far more than anyone bargained for) to get in the way. As for Albert the old recluse – well, he’s dead. But he’s still waiting too.

As the house clearance team remove Albert’s belongings, they learn about his life. As the furniture and rubbish clears, so does the chaos of their own existence and new connections are formed. A warm, witty musical packed with pathos, that appeals to a wide audience. The music is varied, with a mix of soft rock, powerful solos and a touch of music hall. This is a touching and uplifting piece, that unites the cast and embraces the audience.

An attractive young man anywhere from 28 to 35 in stage age. He’s the boss of the crew, running this as his business. He is appealing and kind of nature, but a good leader. He seems oblivious to Sharon’s crush on him, but this is deliberate. He has a secret and feels he is not worthy of her. He deflects attention with humour and apparent indifference, but underneath is fiercely protective of her. Needs to be an excellent vocalist.

A quirky young girl aged 22-25. She is gaining work experience with the crew, while studying antiquities. She has a love of the past and a compassionate heart, but she’s also feisty and full of spirit. She adores Mac but feels unnoticed by him. Sharon is the crew member who helps most to reveal the history of the house, and of Albert and his sister. Her vocals range from rock to lilting ballad, so she needs both belt voice and the ability to let her voice ‘float’.

An ex-executive down on his luck, dealing with a messy divorce. The role is multi-levelled ranging from bitter, explosive anger to unexpected compassion. Russ requires deft comic timing. This is a challenging and exciting role, that gives an actor a chance to demonstrate his range and depth. Needs a strong vocalist. He’s older, but still of working age, so 50-55.

A young lad on the crew who is underestimated by everyone, stage age of 17. Seen as strange and none too bright, he’s picked on, teased, and pushed around, which is for the most part comical. He’s also from a dysfunctional background and is guarded. Yet beneath his oddness lies a singing talent and his story is about how he manages to harness that, with a little help from his friends. A completely lovable character, with both funny and deeply emotive scenes.

Albert’s neighbour and carer, to whom he has left the house – aged 45-55. This makes her the paying customer during the house clearance. She pops in to check on things, take bits she wants to treasure and help sort out the lives of the crew. A hearty, bold and cheeky woman, stern when needed, but generally very cheery, a gossip and lustily flirtatious with Russ, which sends him on the run. Mrs T cared deeply for Albert, which means she also has poignant moments. Even though she is an OTT character, her quiet moments are soft and gentle.

A fragile older man, but not elderly – between 55 and 65. He has lived as a recluse in a rambling old house for many years. Now deceased, he gently haunts the house as its contents are cleared. He waits to be claimed by his beloved sister Aimee, who died some years before. He is a slightly lost figure, sweet but stuck in his ways – he must capture our hearts. A role with intense pathos and a death scene that requires a certain amount of physical energy.

Reviews for the 2005 production at The Castle, Wellingborough

“Hats off to the Castle for staging ‘Wired’. Look out for the two Kayes – if this is a measure of their talents, then their names will soon be up in lights!”
Willy Gilder, BBC Radio Northamptonshire

“Kaye Tompkins and Kaye Vincent show real tenderness…this was a truly inspirational piece. There were some very touching moments…a thought provoking, well written and moving play. When [Brains] sung the stunning song ‘In the Quiet Time’ he brought goosebumps and tears to my eyes.”
Emma Austin, BBC Radio Northamptonshire

“The Writing Team tell real stories beautifully, poignantly and honestly through words and music…I truly believe that it is a great show with wonderful music…that will knock people for six.”
Bart Lee, Artistic Director, The Castle, Wellingborough

‘Wired’ looks set to make a big connection with the audiences who go and see it…the new musical has a stamp of freshness and vitality.”
Lawrence John, Herald and Post, Northants

Samples of audience reactions, received for the 2005 production:

“Wired appealed to all, with not a shred of apathy noted by anyone.”

“Frighteningly talented…You managed to achieve just the right balance between high emotion and outstanding humour and the two complimented each other perfectly.”

“The songs were so important and came just at the right moments, no contrived ‘it’s time for a song’ interventions that happen in some musicals.”

“Exciting, to say the least!”

“Probably the most awesome thing I have seen at the theatre.”

“Being fortunate enough to see it three times was a real bonus.”

“A triumph…so believable and real.”

“It was very refreshing to find an original musical based on the world of real work, not lifted from literature or showbiz life.”

“Having been privileged to see the final show on Saturday I hope the next step is a UK touring production. Wired certainly deserves to be seen by many more people. I would definitely pay to see it again.”

“Quite simply blown away with the whole way the show was put together.”

“A truly magnificent piece of theatre.”

“The music was tremendous and the story was not too complicated to follow, but still held the interest – sounds like the ideal combination for success.”

“In my opinion each song really did develop and enhance the characters brilliantly.”

“Wired will be a fantastic success.”

“Wired is a great piece of work and deserves to do well.”

“Very appealing in a commercial sense.”